With Autodesk Fusion 360 now having a Machine builder + Simulator, are there any plans for Pocket NC to include the model in the machine library, as other manufacturers have done? (see screenshot below) 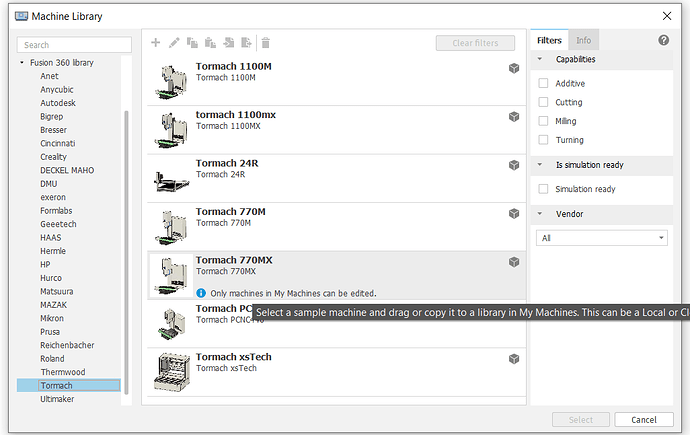 I know that you have a simulator already, but i’ve encountered two problems with this. I’m not sure if they’re specific to me, or if others have them also:

As of right now we do not plan to have a machine file included in Fusion 360. I have, however, thrown together one for the V2-10. It has not been thoroughly tested and will likely need some fine tuning, but it should get you started. It can be downloaded here - PocketNC_V2_Machine_Configuration.machine - Google Drive

As far as our simulator goes, make sure that you have pressed the stop button before attempting to select the V2-50 as your machine model. If that doesn’t work, try clearing your browser’s cache.

And, unfortunately, there is not currently a way to simulate the spindle being pulled out.

I hope this helps!

Thanks Q, I knew I was doing something stupid with not being able to select the V2-50 in the simulator!

I’ll check out the V2-10 machine file that you’ve kindly sent as well. It’d be pretty cool to have that, as it would automatically pick up on spindle stick-out and tool lengths by the sounds of things, even though the Pocket NC simulator is really good.

Alex, have you made a machine model of the V2-50 yet? I would like a file of it if possible?

No i’m afraid I haven’t done a machine model for the V2-50. I’m actually upgrading to a Haas machine, so I sold my V2-50 just after posting. My reason for wanting the machine model was to help the guy who purchased my machine with simulation when the spindle is pulled out. You also don’t have to enter tool lengths in the machine simulation like you do with the Pocket NC simulator it seems.

As it turns out though, the type of parts he’s doing won’t need a full machine simulation, nor will he need to pull the spindle out. So, i may play around in the future, but in truth, i probably won’t.